Julie asked us to post our "official" observation lesson plans.
Here in Texas we are observed by PDAS. I should know what that means, but I don't.
It has several components to it. We are given a formal 45 minute classroom observation early in the year. Mine was in November. We also have self evaluations to include and we get many, many walkthroughs throughout the year. And, I do mean MANY.

In my district, we input lesson plans into Eduphoria. It is a computer program that stores our lesson plans, test and data, PDAS info, staff development. Its nice because everything is in one place. We no longer "turn in" lesson plans either. Our administration has access to all of our information.

Each week, I kind of "fill in the blanks". The cool thing is we can share our plans with other teachers. Same subject, same grade, click of a button and plans are done! 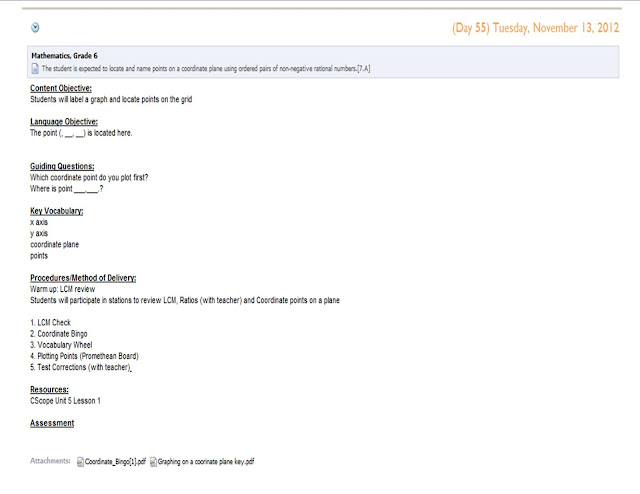 These are pretty basic. Some days I have more written, some days maybe less. My students did stations for my observation. I will admit though, my observation was in first period. I tried this with my 3rd period and it was a disaster, so I scraped stations and the rest of the day was much different.

The idea was for students to work independently on known concepts while I met with students about their previously taken test. I also incorporated the Promethean board because that has been a focus with our principal. More interactive lessons is the key. Students needed more help from me with this. That got scraped during the other classes. We worked on that and now they could probably do that, but November was too early for that one.

Overall, my PDAS observation went well and I am very pleased. Last year was a different story, but man, have I improved since then. So glad I tried this middle school thing again.